Plan created by another user.Make it yours
Edit start date
Want to change plan duration?

A trip to Hamilton Island takes you to a car-free destination mostly covered in bushland.

Discover out-of-the-way places like Scuba & Snorkeling and Passage Peak. There's still lots to do: kick back and relax at Catseye Beach, bet on your favorite at Go-Kart Racing Track, head outdoors with Jetryder, and take in the exciting artwork at Hamilton Island Art Gallery.

Plan trip to Hamilton Island with our itinerary maker to find out where to go and what to do.

London, UK to Hamilton Island is an approximately 29-hour flight. The time zone difference moving from Greenwich Mean Time (GMT) to Australian Eastern Standard Time (AEST) is 10 hours. Plan for much hotter temperatures traveling from London in January, with highs in Hamilton Island at °C and lows at °C. Finish up your sightseeing early on the 20th (Mon) so you can travel to Whitsunday Island.
more less

Things to do in Hamilton Island 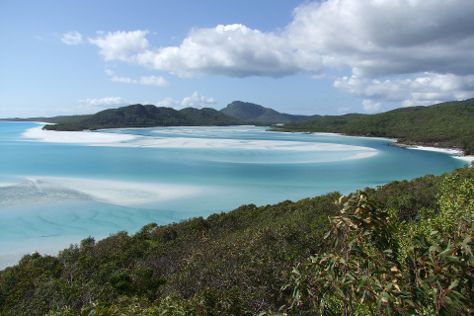 ©
Start off your visit on the 21st (Tue): tour the pleasant surroundings at Whitehaven Beach and then explore the activities along Hill Inlet. On the next day, head off the coast to Whitsunday Islands National Park.

For maps, other places to visit, traveler tips, and tourist information, use the Whitsunday Island trip planner.

Explore your travel options from Hamilton Island to Whitsunday Island with the Route module. In January, plan for daily highs up to °C, and evening lows to °C. On the 22nd (Wed), wrap the sightseeing up by early afternoon so you can travel to Brisbane.
more less

Things to do in Whitsunday Island

Queensland’s biggest town and state capital, Brisbane has an attractive, manicured image based around its riverside aesthetic as well as the contrast between its high-rise center and extensive urban greenery.

To find maps, photos, where to stay, and other tourist information, read Brisbane trip builder tool.

Traveling by flight from Whitsunday Island to Brisbane takes 4 hours. Alternatively, you can take a train; or take a bus. Expect a daytime high around °C in January, and nighttime lows around °C. Cap off your sightseeing on the 30th (Thu) early enough to go by car to Noosa.
more less

Things to do in Brisbane

Known for its "green" development and north-facing beach, Noosa is a natural getaway.

Step off the beaten path and head to Carlo Sand Blow and Noosa River. You'll find plenty of places to visit near Noosa: Mount Coolum (in Coolum Beach), Caloundra (Kings Beach & Bulcock Beach) and Mooloolaba (Scuba & Snorkeling & SunJet Simulations). Spend the 3rd (Mon) exploring nature at Noosa National Park. There's much more to do: enjoy the sand and surf at Maroochydore Beach, admire the sheer force of Kondalilla Falls, take in panoramic vistas at Mount Tinbeerwah, and browse the eclectic array of goods at The Original Eumundi Markets.

Traveling by car from Brisbane to Noosa takes 2 hours. Alternatively, you can take a bus; or do a combination of train and bus. Wrap up your sightseeing on the 6th (Thu) to allow time to travel to Fraser Island.
more less

Things to do in Noosa

For maps, photos, other places to visit, and other tourist information, refer to the Fraser Island itinerary planner.

Things to do in Fraser Island

Explore your travel options from Fraser Island to Yamba with the Route module. In February, daytime highs in Yamba are °C, while nighttime lows are °C. Wrap up your sightseeing on the 16th (Sun) early enough to drive to Byron Bay.
more less

Things to do in Yamba 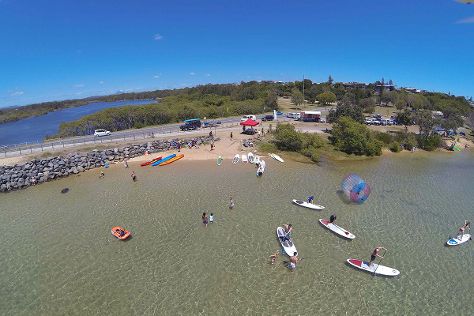 Named after Lord Byron's grandfather, Byron Bay is not only famous as the easternmost point of Australia, but even more so as one of the liveliest vacation spots in the country.

Discover out-of-the-way places like Watersports Guru and Belongil Beach. Venture out of the city with trips to Lennox Head Boardwalk (in Lennox Head), Tweed Regional Gallery & Margaret Olley Art Centre (in Murwillumbah) and Lighthouse Beach (in Ballina). And it doesn't end there: trek along Cape Byron Walking Track, explore the activities along Lake Ainsworth, stroll through Tallow Beach, and find your balance on the water with some of the best stand-up paddleboarding in the area.

To see more things to do, other places to visit, ratings, and tourist information, you can read our Byron Bay trip itinerary maker website.

Traveling by car from Yamba to Byron Bay takes 2 hours. February in Byron Bay sees daily highs of °C and lows of °C at night. Wrap up your sightseeing on the 23rd (Sun) to allow time to travel to Sydney.
more less

Things to do in Byron Bay 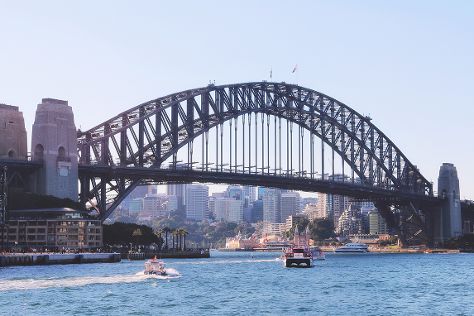 Lent iconic status as a result of its famous bridge and opera house, Sydney has a down-to-earth charm that enhances its spectacular setting and functional efficiency.

You'll explore the less-touristy side of things at Canyoning & Rappelling Tours and Photography Tours. Get out of town with these interesting Sydney side-trips: Kiama Blowhole (in Kiama), Shelly Beach (in Manly) and Nan Tien Temple (in Wollongong). The adventure continues: take in the views from Sydney Harbour Bridge, race across the water with a speed boat tour, get your game on at Flight Experience, and kick back and relax at Manly Beach.

To find photos, other places to visit, and other tourist information, you can read our Sydney trip website.

Fly from Byron Bay to Sydney in 4 hours. Alternatively, you can drive; or take a bus. In February, daytime highs in Sydney are °C, while nighttime lows are °C. Finish your sightseeing early on the 3rd (Tue) to allow enough time to travel to Melbourne.
more less

Things to do in Sydney

You'll explore the less-touristy side of things at Balloon Rides and Ballarat Wildlife Park. Venture out of the city with trips to The Great Ocean Road (in Torquay), Spas (in Daylesford) and Geelong (The Food Purveyor & Eastern Beach Reserve). Dedicate the 10th (Tue) to wine at some of the top wineries in the area. There's much more to do: admire the natural beauty at Royal Botanic Gardens, see the interesting displays at Melbourne Museum, pause for some photo ops at Shrine of Remembrance, and get to know the resident critters at Melbourne Zoo.

Getting from Sydney to Melbourne by flight takes about 4 hours. Other options: drive; or take a train. Traveling from Sydney in March, expect slightly colder with lows of °C in Melbourne. You will leave for home on the 14th (Sat).
more less

Things to do in Melbourne